To find out more:

The video on my main gallery page of my solo exhibit, "There, There: Healing Dolls as Solace in an Off Kilter World,"  January through March of 2019 shows some of my most recent dolls. The video tells the story of many of my dolls in detail and helps you to see them in three dimensions. Several of the dolls have sold. I have tried to note in the gallery which dolls are no longer available. 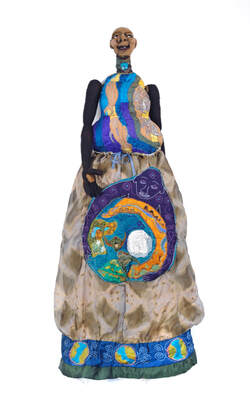 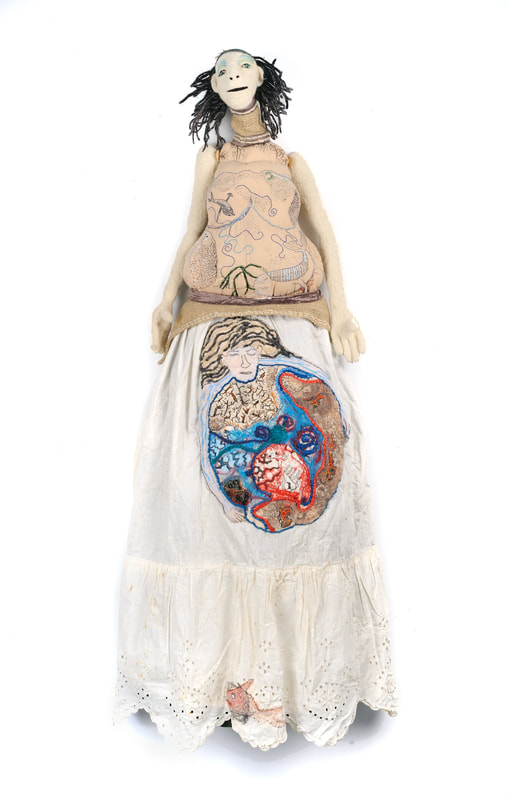 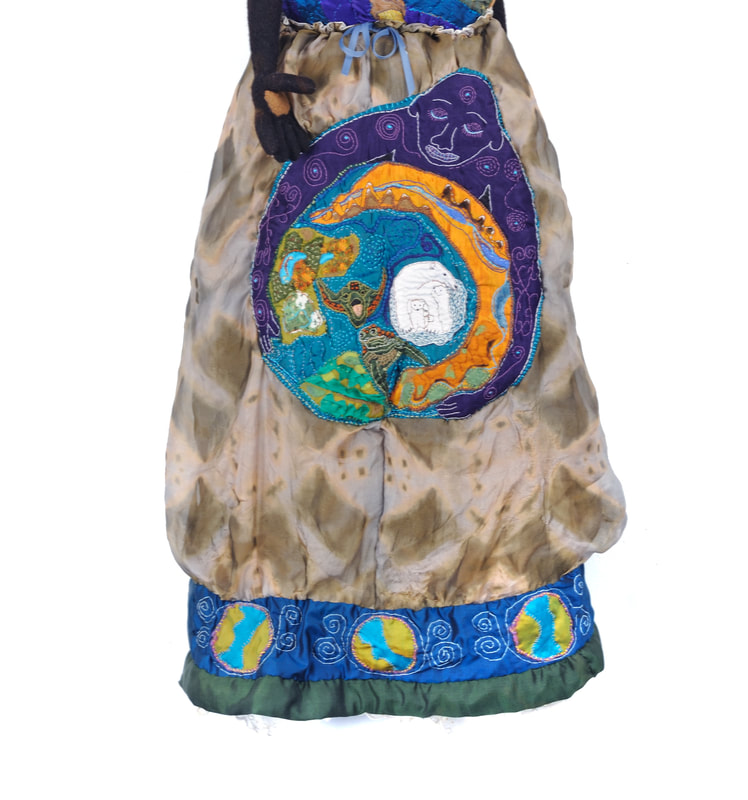 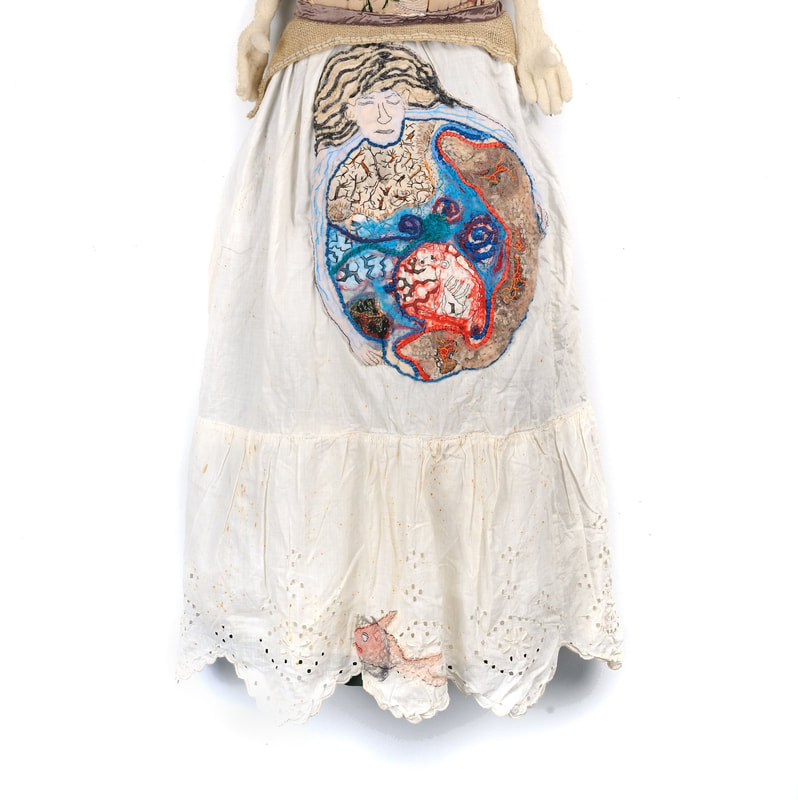 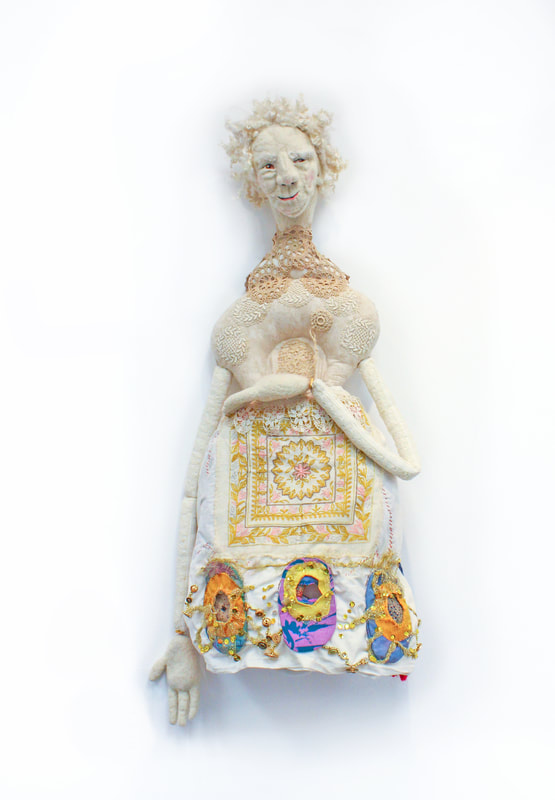 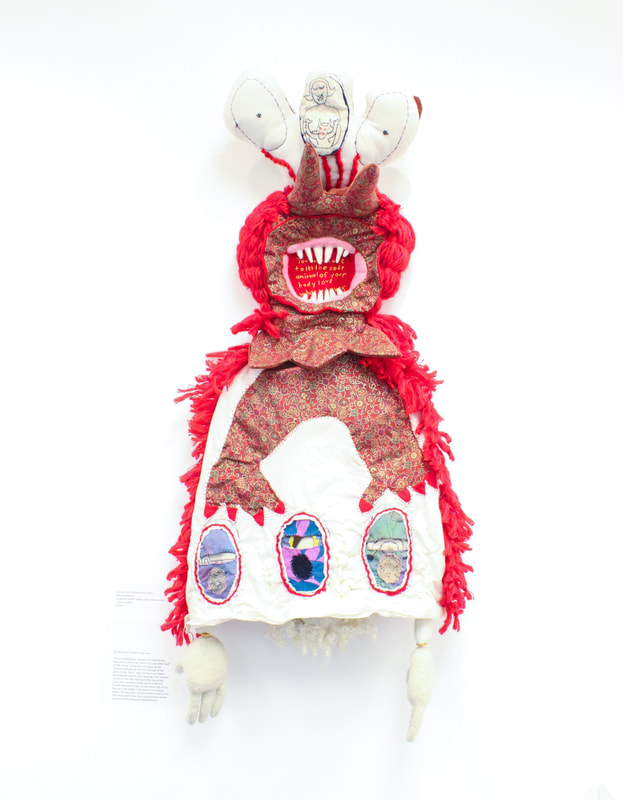 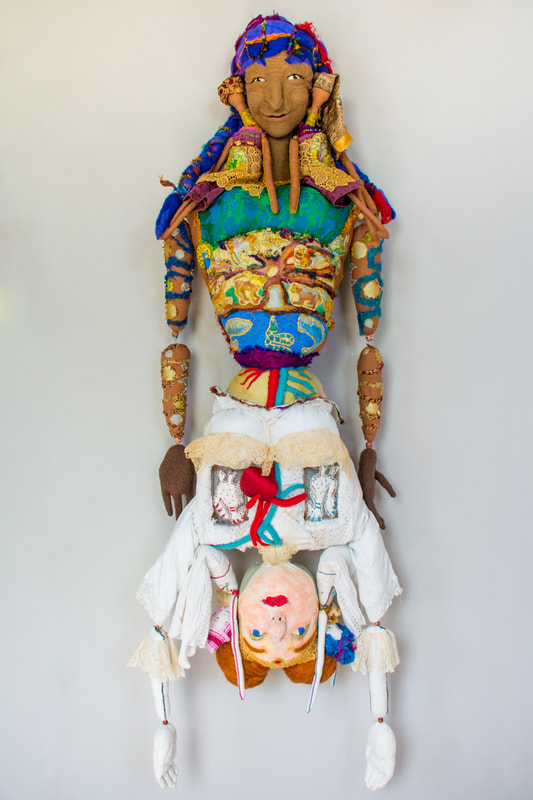 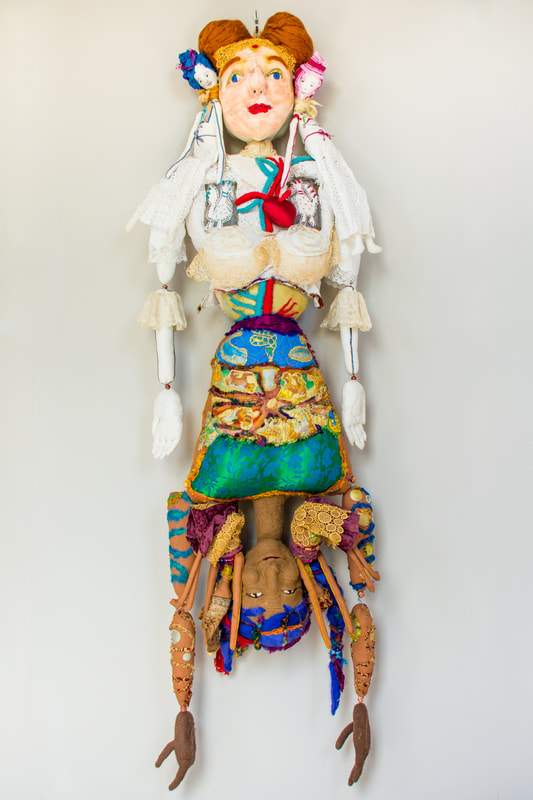 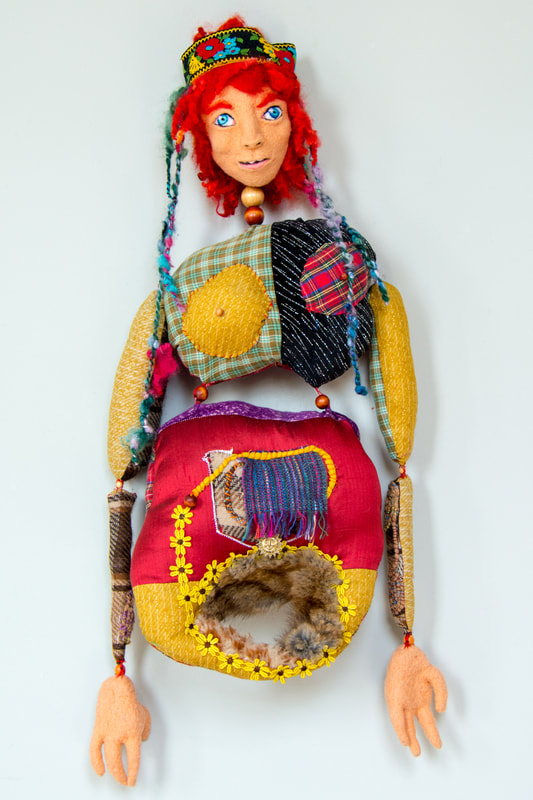 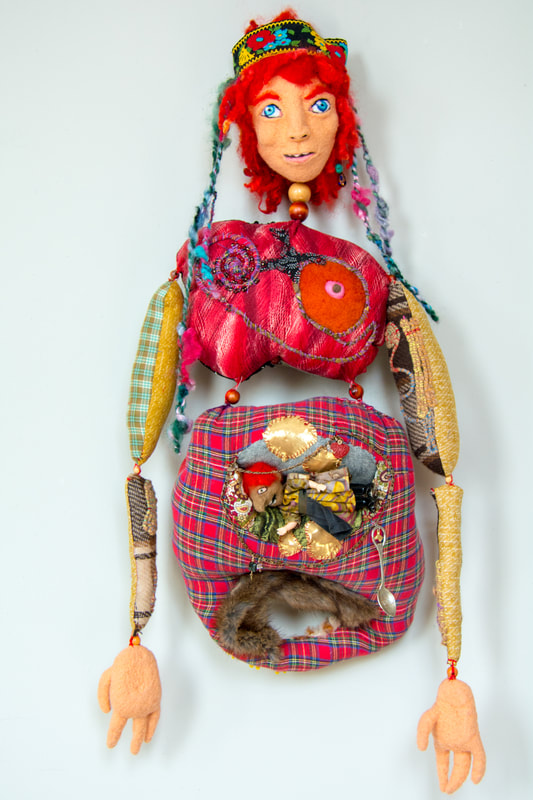 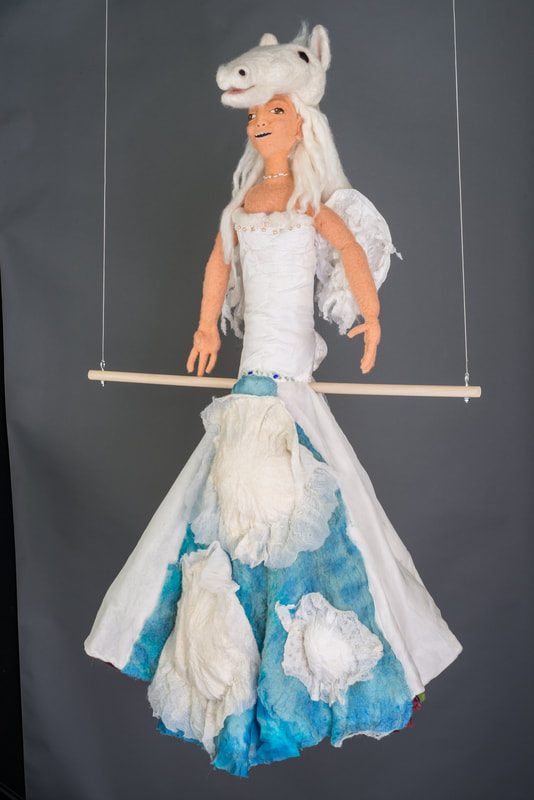 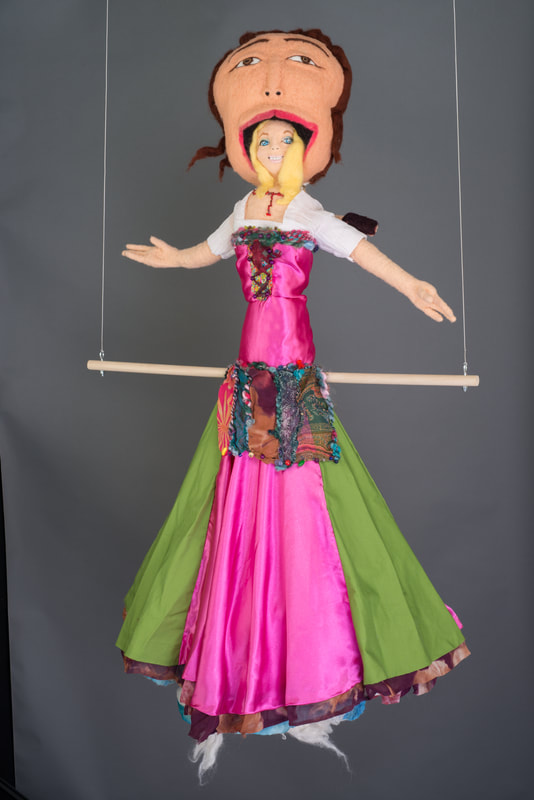 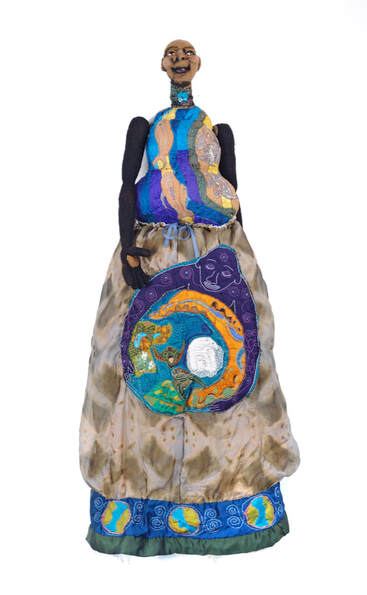 The Living Earth: Healing Darkness vs Nuclear Light, a flip doll, or two-sided doll, asks the question, what would it be like if we allowed the earth to heal?  Cities usually covered in smog would suddenly able to see and breath. Once clogged highways would be free of congestion and noise. The broken and burned body of the earth would have a respite, a chance to take a breath.

The Healing Dark side of the flip doll body, shows whales and elephants, in their migrations, reinforcing the "ley" lines of the earth, invisible lines of energy that hold the earth together. On the skirt of the healing dark side the earth is shown as a feminine being, holding us and all living beings in her embrace.

On the Nuclear Light side body, we see the ravages of climate change on our oceans. At the top of the ocean, garbage circles the surface of the ocean and sinks below, poisoning fish and other deep-sea creatures. Fish are caught in nets or injured by spears and left to die. On the nuclear light side skirt, fire and incessant "nuclear" light burn the surfaces of the earth. The polar bear, starves on her tiny remnant of ice. Forests burn and water heats up. This could be our immediate future.
​ 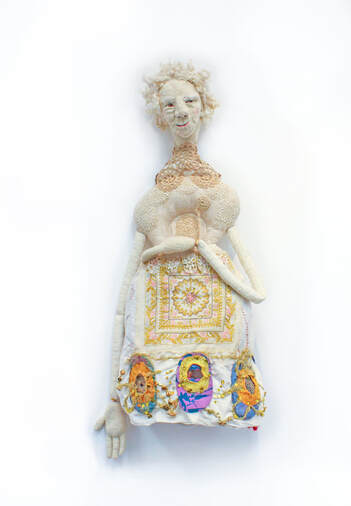 Facing Fears/Transforming Fears is a healing doll. One the one side are six fears that confront me, each in its own little “pod” on the “head” of the doll. Each pod can be removed and placed into the openings of the skirt. On the “fears” side, the fears are hidden when placed into the skirt openings. The monster mouth on this side represents fear but at the same time, the Mary Oliver quote inside the mouth represents hope.

On the other side of the flip doll is the healer, with gold on her pointer finger. The fear pods can be turned around to this side and transformed, the transformation being represented by the gold embellishments. 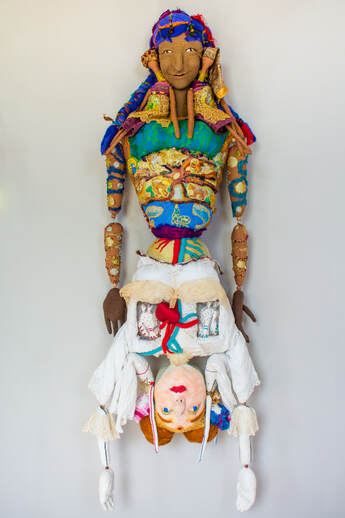 One side of this doll is Rhea, a Roman mythological figure symbolizing Mother of the Gods, and in this case, representing Mother Earth. She has an image of the tree of life on her belly and twelve creatures, mythological and real. Her two consorts or guides sit on either of her shoulders.
​
On the other side is Raina, symbolizing Everywoman, in her guise as an empress. Her guides or consorts sit on her shoulders. The mythological figures of griffins on either side of her heart also act as protective figures. The veins and arteries of the heart (on the Raina side) connect to the rivers and streams (on the Rhea side.) The doll as a whole symbolizes how as women we are deeply connected to the earth. 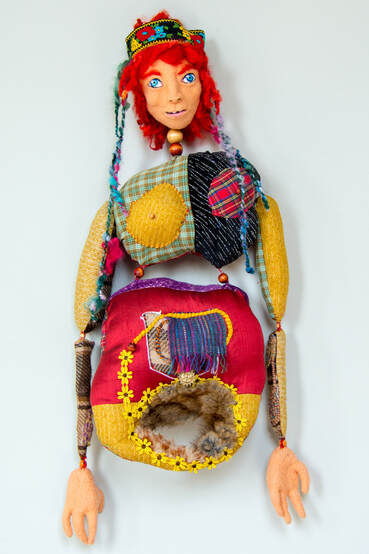 Lalita is the Indian goddess who is a representation of Shakti, the opposite of destroyer, Kali but also wild like Kali. She embodies the feminine, the sensual and sexual. She represents union of opposites and sexual union, the union of various parts of the body and spirit, and the creative life force.

​The second part of her name, lovely and dangerous fire come from the Gerard Manley Hopkins poem, The Windhover..”and the fire that breaks from thee then, a billion times told lovelier more dangerous, oh my chavalier….” He is talking about his experience of spiritual ecstasy in encountering Christ. Lalita is a  human triptych in honor of the spiritual and sexual forces. She is vulnerable and open and strong. Powerful in fact.  She is a sideways flip doll with another body on the other side.

THIS DOLL IS SOLD 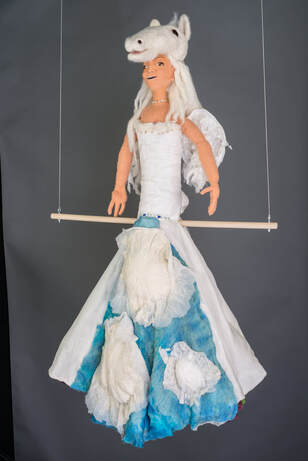 One side of this alter ego flip doll is Barbie, in her role as an exaggeration of a feminine ideal. She is constrained by an internalized nagging voice of Anita Bryant. On the other side is Miranda, riding Pegasus, the white winged horse. This side was inspired by the Tibetan Shambala concept of “wind horse,” or spiritual balance. Miranda is free and unconstrained by inner and outer expectations.

To see more about this "alter ego" flip doll and one of Erika's first flip doll exhibits, click here.